Isaiah Ramirez joined Alpha Omega Academy as a 3rd grade student in March of 2012. Since then, he has astonished teachers with his writing abilities. Isaiah not only does a fabulous job of avoiding spelling, grammar, and punctuation errors that are commonly seen in 3rd grade writing, but he also incorporates great detail and humor into his stories. Among other things, Isaiah enjoys writing stories and making movies in his free time. Isaiah says that he is motivated to write by ordinary, everyday experiences. Everyone and everything has a story. He may see a sad face and wonder what made that person feel sad. His vivid imagination then pulls scenarios and exquisite details into a story. 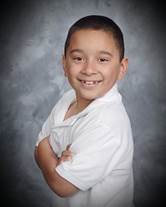 When asked what he wanted the readers of the AOA Today to know about him, Isaiah responded, "I have a heart for helping others. Most people don't know, but I am a part of a disaster relief ministry going into disaster areas to feed, clothe, and support victims of disasters. I have come to realize we are very blessed, every day is a gift, we don't know what the next moments will be, and above all, love! It's easy to become angry, bitter, and hate, but it takes strength and courage to love." Isaiah has an attractive spirit and we hope that he continues to lead others through his writing. Below is one outstanding example of his fantastic writing skills.

Thank you
By Isaiah Ramirez

I was twenty-seven years old.  I had never really done anything with my life.  I ran with the same crew from high school.  Some called us a gang; I only knew them as nine of the best friends a man could ever have.  I didn't care about anyone or anything; just me.  I don't even remember saying the words "please" or "thank you" ever.

I lived in a small town near miles and miles of forest that gave way to large mountains.   There was nothing to do in this small town.  Either my friends and I act like the local boring church going folks or we could have a little fun.

I gathered the boys and we came up with a plan.  That night we would break in and take the shiniest and best stuff from the store.  A few would act as look outs while the rest of us would clean the store out.

It was midnight when we broke in.  I don't know who did it but the silent alarm was triggered.  We didn't find out until the cops were hot on our tail.  It was chaos when the cops busted through the door, yelling, and waving guns.  We all ran out the back door and met up with the guys who were "supposed" to be our look-outs.

The woods were nearby and I knew it would provide us some cover.  We ran as fast as we could with cops yelling for us to stop and freeze.  We rounded a large oak tree and came upon a dark part of the woods I didn't remember seeing before.  I spotted a deep dark cave and yelled for the guys to come and hide inside.  "Follow me" I yelled and as always, they did as I said.

The cave was completely black and very quiet but we just kept running.  We spotted a light at the end.  It was just bright enough that I thought it led back to the center of town.  We penetrated through the light and suddenly we were in a hot dry desert.  It was early morning and our clothes were shredded.  We were all a little confused.  We didn't see anything familiar.  There was a lot of sand, mud-like houses, and lots of animals.  People were dressed funny too.  I don't know why I thought the cops were still after us but I knew we couldn't just stand there waiting for them to catch us.  We gathered ourselves and stole clothes to fit in.  We found shelter under an abandoned tent and stole food from an open market.

By day we walked among the people and stole from wherever we could.  We did our best to survive in this foreign land.

After a couple of days of searching for that portal, that dimensional door, that mysterious vortex or whatever you want to call it, we had realized we wouldn't be going home any time soon.

It was now a couple of weeks later and we were all starting to feel ill.  One by one, we grew sicker.  Our skin burned, our mouths were dry, our vision was blurred and our minds were foggy, we were miserable!  There was no help.  This was the desert.  This was a whole different time.  There wasn't an emergency room we could walk into.  No one would even come near us and we were all alone.

Alone was nothing new to me, I had been alone since my mom and pop left me as a young child.  Me and alone, well, we were best friends.

One hot afternoon, while at one of the village wells there were some old fools talking about a man who could heal.  He would soon be arriving at our village.  I figured he was a shaman and I wasn't going to have any part of that hocus pocus.  By that night, half of us were insane and on the verge of death.

As I lay there covered in wretched sores, I reflected.  They always say ‘at the end you reflect on your life', well it's true.  I could only think of what I could have been and done with my life.  Then the nightmare of seeing and thinking of the people I hurt.  The misery of my memories overshadowed my physical pain.

By the next day, I made a decision, I wanted to live.  I gathered my friends and we all went to the center of the village.  There were crowds of people everywhere but we pushed our way through.  They were glad to make a way for us; after all, no one wanted to be near the very sick and dying.

There he was!  He wore a beard, robe, and sash.  Everyone was beckoning for him.  They were yelling his name and I found myself yelling as well.  At first, in a small voice but then louder and louder.  I was so afraid he'd pass us by.  "Please have mercy on us"!  I yelled.

He turned our way, looked at us with compassion, and said "Go, show yourselves to the priests."

"Say what?!" I thought to myself but I did it, I wanted to live!  I grabbed the guys and found the priests.   We showed ourselves to them no matter how unhappy they were about it.

Then, it happened, our skin stopped burning, our vision cleared, and life was restored to us.  We were so happy and overjoyed that we yelled, laughed and danced right where we stood.

Then, it occurred to me, I had to get to him.  A rush of urgency arose over me and I found myself running as fast as I could to the man who healed me.

I threw myself at his feet weeping like a little girl.  I couldn't help myself.  I praised God as loud as I could.  As I lay there with my cheek pressed upon his feet and tears streaming down my face, he lifted me up.

His smile of compassion gave way to concern and asked "Were not all ten cleansed? Where are the other nine?" I didn't pay attention to my friends who didn't come.  The only thing that mattered was thanking this man who saved my life.  It was the first time I said "thank you."

“Mr. Burns (AOA online teacher) is our saving grace! He is doing an excellent job of reaching my son in chemistry. If it wasn’t for my son’s teacher, we would not be able to do online learning!”