When Jerryn Puckett recently graduated from college and landed her first job at NASA, she knew her current career was launched by her educational experience at Alpha Omega Academy. That’s why Jerryn was so grateful to answer a few questions and share her inspirational story of discovering God’s path for her life and the winding road that led to her success in college success to today! 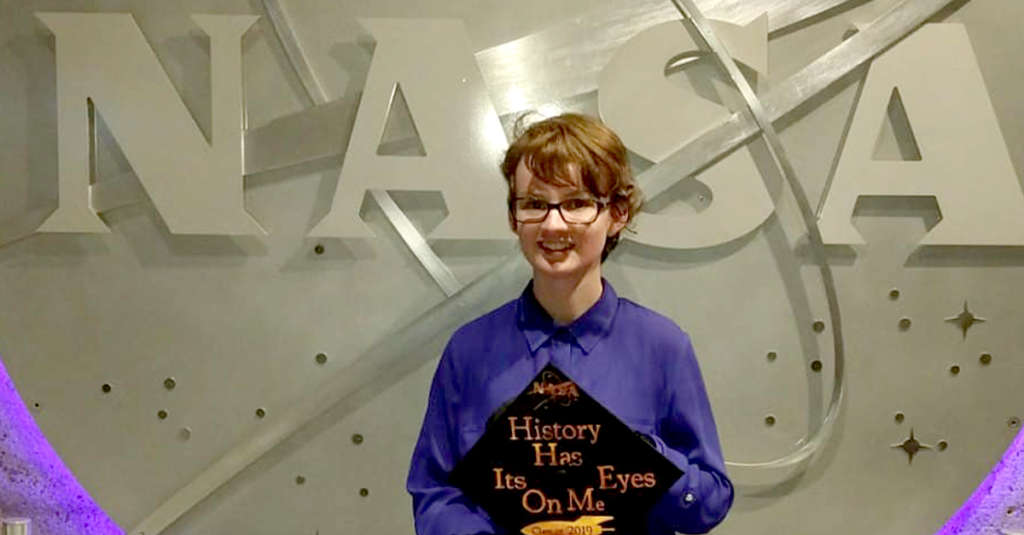 How do you think AOA helped prepare you for what you’re doing now?
Looking back, AOA has played a significant role in forming my interests, as well as aiding in developing my academic career.

At AOA, if a particular individual or experiment caught my interest, I would stop my lesson and spend time researching that. AOA gave me the flexibility to be curious. This not only encouraged my thirst for knowledge and discovery, but it also allowed me to develop research skills that I have utilized in my collegiate career, as well as in my job at NASA. The teachers and staff also played a role in preparing me for where I am now. My teachers always pushed me past “good enough.” They saw my potential and pushed me towards achieving it.

What is something you enjoyed about going to AOA?
Though I was enrolled in a computer-based curriculum, I wasn’t isolated. There were online clubs and classes that still allowed me to interact and engage with teachers and fellow students. I was a member of the National Honor Society, the book club, and the French club.

Another thing I enjoyed was the freedom AOA gave me as far as actual course time. I have won a national championship playing women’s professional football. As an athlete, I was traveling frequently for competitions, including twice a year for Junior Olympics and Nationals. At AOA, I had the ability to take my schoolwork with me while traveling or I could work ahead so I did not have to worry.

How did you choose your career path?
It certainly wasn’t the path I started out on. I grew up determined I was going into veterinary medicine. Through my journey at AOA, I was actively working with animal rescues and animal shelters. When I graduated and entered college, I was still determined to become a veterinarian; however, during my sophomore year, I started working as a teaching assistant for the history and political science department. By working closely with the department and exploring some historical themes in my academic papers, my love for history grew but it still wasn’t where I saw myself.

During my junior year, things started to change. The clear path I used to envision was gone. All I saw was a brick wall and I felt trapped. The fall semester, I was taking genetics, as well as an English research class. In the English class, I chose to write on the political significance of Operation Paperclip looking at missiles and rockets.

In the early research phases, I was fascinated with the political climate that helped to grow America’s space program. Specifically, I found myself interested with the life and work of rocket engineer Wernher von Braun. My paper turned into a focused discussion of the impact Dr. von Braun had on the sociopolitical climate of the Cold War.

The intersection of science and culture was something that always interested me. In my science classes, I found myself not just focusing on the science, but also how it emerged. After a lot of prayer and council with my mentors and advisors, I made one of the hardest decisions I have ever had to make, and I changed my major to history the following semester. Though I still felt uneasy about the switch, the road forward began to reveal itself, and I felt a weight lift off my shoulders.

During that semester, I started to work on developing my research and exploring new themes related to both the history of science and the history of aerospace exploration. After working on several presentations and digging into the NASA archives, my career goals shifted again. This time I decided I wanted to work at NASA as an historian.

What is something you wish you could go back and tell your younger self, just starting out at AOA?
I would tell myself to step back and enjoy every opportunity AOA offers and to not be afraid of asking questions and leaning on my teachers for support. I’d say that AOA is going to offer some of the best years of my academic career and then the road is going to get a little tougher. You may not end up on the path you think you are taking, but it is the one God has laid out for you. He has bigger plans! Along the way you are going to meet the best support system you could ever ask for, as well as some of your best friends. Enjoy each step that life is going to give you during your time at AOA and into the future. Above all, I’d say not to run from opportunity. God is going to open so many doors, so don’t be afraid to take them.