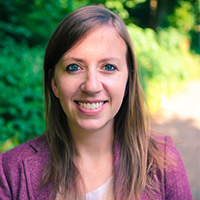 After two and a half years of experience in a traditional social studies classroom, Amy Carter joined the online learning community at Alpha Omega Academy. She currently teaches middle school history, world history, and government and economics. Her favorite part of teaching is interacting with students.

“They are why we do this,” Carter said. “I love reading students’ work when it is clear they are trying to internalize the course material and put their own spin on it.”

Born in upstate New York, Carter earned her degree in political science and adolescent education at the State University of New York at Geneseo. She has two older brothers with whom she enjoyed playing basketball and video games as a child. Carter also has a great relationship with her parents, who were diligent in teaching her about God’s love and grace when she was young.

Today, Carter’s hobbies include reading, watching movies and sports, and playing with her two sons. Two of her most unique talents include the ability to spell words backward at a quick pace and whistling like a bird. If she were to make a list of her favorite things, it would include macaroni and cheese, The Lord of the Rings movies, and IMDb. In addition, she never leaves home without lip balm.

Three words Carter uses to describe herself are loyal, apprehensive, and communicative. Her most prized possession is an alphabet decoration made by 26 of her friends for her son’s nursery. If she could pursue any other career in the world, Carter would choose to be a screenwriter. Someday she would like to tour Europe.

Since Carter teaches history and geography, it probably comes as no surprise that she would choose to meet the founding fathers if given the opportunity to meet anyone in the world.

“I want to ask them if they had any idea what an impact they would have on the world and modern politics,” she said. “And I would ask them how they stayed so brave and so sure of their course amidst such fierce opposition.”

Carter’s favorite Bible verse comes from the book of Matthew.

“And why are you anxious about clothing? Consider the lilies of the field, how they grow: they neither toil nor spin” (Matthew 6:28).

"Marie, my daughter, has been attending AOA at home for three years and all I can say is, 'GREAT!' The lessons are very easy to follow and the teachers are always there for her when she needs help."—Lisa W.