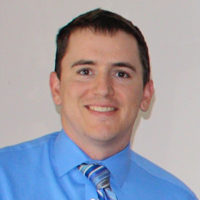 As director of Alpha Omega Academy, Josh Rose is responsible for overseeing and managing initiatives that guide the general direction of the online academy. His background in online education comes from five years of experience working for the online division of his alma mater, Liberty University. Rose said his favorite part of being director at AOA is working with other leaders to understand and solve problems.

Born in Jonesboro, Arkansas, Rose grew up in a tight knit Christian family and describes his childhood as pretty normal.

“We spent lots of time as a family with other families at our church and, most of all, we enjoyed each other,” he said.

Today, Rose enjoys spending his free time outside. A few of his favorite activities include hunting, fishing, and camping. A father to three young girls, Rose said he hopes to involve his daughters in all three activities someday. Recently, he’s also taken an interest in the concept of modern homesteading and anything involving self-sufficiency.

A few of Rose’s favorite things include the movie Braveheart, the song Halleluiah¸ and spending time on YouTube. If he could meet anyone in the world, Rose would choose Cody from the Wranglerstar YouTube channel, because he would like to be more like him.

Rose’s favorite meal is steak. His favorite sport is hunting (unless you’re talking organized sports, in which case he would choose football). His most prized possessions are a few guns that have been handed down to him from family members. In addition, his favorite books of the Bible are Joshua and Judges.

The four words Rose would use to describe himself are simple, earthy, introverted, and cautious. If he had to choose another career, Rose would pursue something in wildlife and fisheries, biology, or forestry.

"I was in public school for all years except my senior year. AOA was the best thing I did at the end."—Ashlee G.