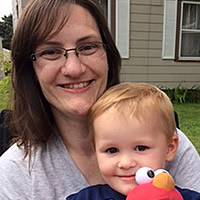 Kristal Drenth, a member of the school support services team, first began working for Alpha Omega Academy (AOA) in January 2006 as an academy services representative but later moved to the records department in April 2007 and continues to serve in that capacity. With a knack for working with details, Drenth’s day encompasses reviewing and updating records, entering transfer credits for incoming students, completing graduation reviews, calculating GPAs, and answering any questions families or staff members may have regarding student records. Her favorite work responsibility is processing diplomas for graduating seniors. “I really enjoy talking with a student about his or her future plans and offering a well-deserved congratulations. Although it may be small, it’s fun to be able to share in their accomplishment,” Drenth said.

Drenth grew up with three siblings on a farm near Davis, South Dakota. Some of her fondest childhood memories are of her mother singing hymns. Due to her mother’s influence, Drenth developed a love for music that eventually led to a college degree with a double major in Vocal and Instrumental Music Education. Traveling with a Christian singing group on two occasions, Drenth sang in the U.S., Europe, and China. Today, she is still using her musical talents to help others. She loves to sing and play at church, as well as present musical programs to the elderly in nursing homes. “I hope that people are encouraged by the music I share, and that God is glorified in the message,” shared Drenth.

Whether preparing diplomas for AOA students or singing in front of a crowd, Drenth’s greatest desire is that others would see Christ working in and through her. Quiet, thoughtful, and friendly, Drenth radiates the joyful, loving attitude that blesses others both professionally and personally.

"We took our son out (of public school) in his Junior year, and he is now doing his senior classes. We are so thankful to God for directing us to AOA. The curriculum is challenging but a much better standard to prepare them for college if they go that direction. AOA is very supportive."—Darlene N.