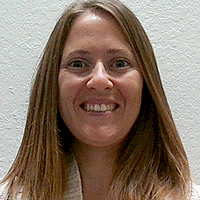 Breanna Robbins teaches middle school and high school English at Alpha Omega Academy, guiding students through their coursework, grading assignments, and maintaining consistent communication with students and parents. Her favorite part of working with students is seeing their confidence soar.

“Once, a student came to me believing that she lacked the ability to write even a simple paragraph,” Robbins said. “After meeting her where she was and working with her to improve one skill at a time, she not only learned to write a paragraph but entire essays. Seeing her pride in her own work was enormously fulfilling.”

Since 2009, Robbins has taught college level writing and literature. Since 2016, she has also worked for an educational publishing company, writing, reviewing, and editing material for digital university English courses.

Although she was born in Honolulu, Hawaii, she claims to have no real hometown. Since her father was a Navy Chief, she moved a total of 9 times throughout her childhood and attended 8 different schools. Between the ages of 8 and 11, she lived in Naples, Italy, and had the opportunity to travel around Western Europe, exploring different cultures and partaking in unique activities.

Self-described as sarcastic, kind, and realistic, Robbins is a single parent to her son with autism. She also enjoys cheering for the Baltimore Orioles, binge-watching science fiction (mainly Doctor Who), and reading. If she could meet someone from history, she would choose Jane Austen.

“Her boldness and tenacity as a woman in her era speaking out on women’s roles, rights, and the institution of marriage is something I highly admire,” Robbins said.

"We cannot say enough good things about AOA! Our son started in 6th grade and continued through until his high school graduation. He is currently attending a university where he is majoring in Mechanical Engineering Technology. In our opinion, AOA is an excellent choice!"—Nancy W.