Describe yourself as a person.
I am hard working and I pride myself on giving my all in everything that I do. I have a strong passion for sportsmanship and I strive to find enjoyment in everything. 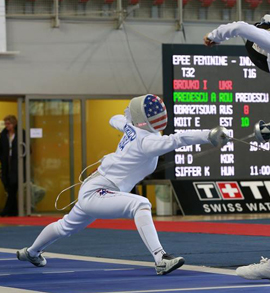 How long have you been a student at AOA?
I have been a student of AOA for four years. Before attending AOA I was in public school. My family moves a lot due to my father being in the military, and my parents started to see that homeschooling would provide a more consistent education with all of the moving. AOA has definitely helped me in achieving my goals both academically and athletically.

What are you most looking forward to about attending school there?
I am most excited about being a part of Notre Dame University's fencing team. I am looking forward to making lifelong friends, working hard together, and cheering each other on to victory.

Do you know what you want to study in college?
In college I would like to study anthropology. I have always been fascinated by studying different cultures and ways of life. My plans and dreams for after I graduate Notre Dame are to make the 2020 Olympics in Tokyo, Japan, and to work hard and find a job in my field of study that I enjoy completely.

How did you become involved in fencing?
My parents met at the University of Texas in El Paso and found each other through fencing. I have fenced most all of my life.

What made you decide to pursue the sport in college?
I decided to pursue fencing in college because I have an undying passion for the sport, and I feel as though I can contribute to the university with my skills. I hope to help Notre Dame in their quests for more NCAA championship titles.

Are you involved in any local clubs or activities?
I coach around seven students at my fencing club, DC Fencers Club. I began coaching three years ago. I became involved because I would like to use my talents and knowledge to help teach and spread the sport of fencing to my peers and up-and-coming fencers.

What would others be surprised to learn about you?
I think one thing others would be surprised to know about me is that I am in love with Asian culture. I listen to Korean, Chinese, and Japanese music, read manga, and watch Korean dramas.

Of what accomplishment in life are you most proud?
An accomplishment in life that I am most proud of is qualifying for the 2013 Cadet World Team. To qualify for the Cadet World Championships I competed in four international tournaments and 11 national tournaments. Achieving high placements throughout the year allowed me to move up in the rankings, and I held the number one place in the country for the cadet age category (13 to 17 years old) the entire season.

The 2013 Championships were in Porec, Croatia and I took 15th place.  Being able to compete at such a level and represent my country at World Championships meant the world to me. I worked very hard and qualifying for the team showed me that it was really worth it.

How has making the team impacted your fencing career?
Making the Cadet World Team has helped me to grow and mature as a fencer. This is just a start and I plan to work very hard to achieve more and more. Currently, I am fourth in the country for the Junior category (under 20 years), and I am fourth in the country for Senior (13 years and up). I am especially proud of my senior ranking because this is the ranking that qualifies us for World Championship and Olympic teams. My primary goal right now is to qualify for the 2016 Rio Olympics.

If you could offer a bit of advice to fellow AOA students, what would it be?
A bit of advice that I would offer to fellow AOA students would be that no matter what time commitments you may have, or how busy your schedule may be, you can always find the time to study and give your all when it comes to your education. Not only is education an important aspect of life, it will also allow for you to achieve your goals.

“We took our son out (of public school) in his Junior year, and he is now doing his senior classes. We are so thankful to God for directing us to AOA. The curriculum is challenging but a much better standard to prepare them for college if they go that direction. AOA is very supportive.”