The December 2019 student of the month is Emily Simants, a freshman at Alpha Omega Academy with a love for theatre and a dream to be a Broadway actress. Although Emily lives in Turkey near the Aegean Sea and the biblical city of Ephesus, living on another continent hasn’t stopped her from making numerous friends at AOA. 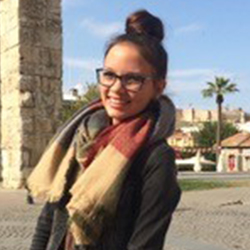 My AOA Story
This is my second year at AOA. Is started in August of 2018. We started talking about AOA about two years before I officially started. I’d been doing Monarch online curriculum through AOP, and when we started talking about it, I got excited about the more social aspect. I was excited to have opportunities to work with other students and teachers. It was also exciting to hear about the official graduation ceremony and the Blue Umbrella school newsletter.

Why I Love AOA
It’s been wonderful to gain friends from school. I was not expecting to gain such amazing friends from AOA. Until I started AOA, I was homeschooled without co-ops or anything like that, so I didn’t have much student interaction. Through AOA I’ve met some of my best friends, and I got to meet one of my teachers in person this summer when I was in America.

I also love being able to do school on my schedule. I work better in the afternoons and evenings, so through AOA, I’m able to make my own schedule, and I’m able to rearrange for things that come up like theatre, lunches with friends, and spending time with my Turkish “aunt” throughout the week.

My Favorite Subject
My favorite subject is New Testament Survey. I love my teacher, and that makes the subject enjoyable. I also enjoy learning about the history of the church and being able to think on my experiences of seeing the sites of the church when I study the New Testament.

My Family
I have three younger siblings. Between the four of us, there is an age gap of 13 years. We like to choreograph dances and sign together, as well as watch movies and look at old pictures.

My Hobbies
I spend my free time singing, dancing, reading, practicing monologues, and writing stories. I’ve written several stories in my lifetime, starting when I was ten.

My Life in Turkey
I spent my entire middle school years (6-8 grade) without ever stepping on American ground. Across the street from our apartment is the Basilica of Saint John, which was constructed in the 6th century and is where St. John is buried. Out my front window is a castle also from the 6th century.

Turkey has amazing food. I love Turkish breakfasts, which encompass bread, jellies, cucumbers and tomatoes, sausage with eggs, black tea, cheeses, olives, and stuffed peppers. I also love manti, which is ravioli with meat inside. Its sauce is yogurt and olive oil with a small amount of tomato paste mixed in.

My Travels
I’ve gone to a youth service camp in Memphis, Tennessee twice, and both times, I worked on a roof even though I’m terrified of heights. I have stamps from four countries in my passports: Turkey, America, Germany, and Azerbaijan. When we go back to the States in the summer, we drive 10,000 miles around the country in four months. I’ve been on an airplane 55 times, have spent 8 days and 11 hours of my life in the air, flown 87,700 miles in total, and been around Earth 3.52 times.

My Goals
When I graduate from high school, I will move back to America and spend the summer with my grandparents while I do things like learn to drive, get a first job, readjust to American culture, and finalize college plans. That fall, I plan on starting college at the University of Oklahoma or Oklahoma City University to obtain a bachelor of arts degree in musical theatre. I love theatre because it’s one of the places where I’m the most me, so it would be amazing to someday be an actress on Broadway.

My Words of Wisdom
Stay strong and have courage. There are things in life that don’t seem fair, but just stand tall. Remember that there are rainbows on the other side of storms, but in the middle of the struggle, fight on, fighter.

“Mr. Burns (AOA online teacher) is our saving grace! He is doing an excellent job of reaching my son in chemistry. If it wasn’t for my son’s teacher, we would not be able to do online learning!”